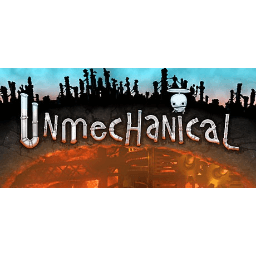 There are a lot of puzzles to solve, and although it’s easy to get into the game, the further you go, the harder the puzzles become.

-Intuitive and simple controls used for a wide range of interactions.

-A carefully crafted world with unique levels and a captivating atmosphere.

-More than 30 different puzzles, including logical and physical riddles, as well as tasks for memorization.

-Immerse yourself in incredible events and unravel a dark secret with cryptic clues.

-Over three hours of puzzles, travel and adventure. -Unmechanical: Extended

One day, whilst out with friends, a tiny robot is captured and sent to a shadowy underground network of tubes and wires. As he flies about looking for an escape, it becomes clear that his prison is more than it appears to be. If he ever wishes to see the surface again, he will have to solve the complex mysteries that are littered throughout his apparent captor.

Unmechanical features a great number of engaging puzzles to solve. The art design is the real hook, and Talawa Games has done a fantastic job creating an alluring inner mechanical (and yet strangely organic) realm that aptly conveys a sense of enormity.
A claw trap from underground snatches the robot from his lush, green realm, and he is dragged through a massive series of pipes. After this initial capture sequence plays out, the player gains control of the robot.

The game plays as a strictly 2D scrolling game, though the visuals have a rich 3D quality to them. The robot can fly in any direction by using the arrow keys or the left analog stick on a controller.

Either mouse button, or any face button on the controller will engage a kinetic from beneath the robot. This can be used to snag and carry items, or the power up certain sensors. Many puzzles will require carrying objects to complete various tasks. -Unmechanical: Extended

Throughout the journey, it becomes clear that the hero isn’t alone in this ancient tomb. Is this other presence friendly, or could it be the one behind the kidnapping that initiated this quest? Repeatedly, the other entity quickly vanishes seconds after being spotted, adding yet another layer to the mystery.
Initially, the completion of tasks will only lead the robot deeper into the cavernous expanse. Accessing new areas will generally involve solving the restrictions of a series of machines that will in turn help to engage part of a larger mechanical construct.

With the number of puzzles to solve in Unmechanical, it’s noteworthy that so few of them feel in any way similar. Some will require manipulations of switches and levers, while others will rely on a quick precise movement response from the player, while others require combining several elements in a room. -Unmechanical: Extended

With the high degree of variance and difficulty in the game’s obstacles, some players are bound to hit snags. Fortunately, the robot comes with a hint instinct feature. Triggering this will (sometimes) display a still-image glimpse of the bot’s mind, indicating what must occur next. These images are purposefully vague, but often provide just enough to get the ball rolling when confusion grinds the gears to a halt.

Only a few of the puzzles really had me scratching my head beyond the hint feature, and once I finally did solve these, it was quickly followed with a sound palm to the face for not spotting the solution sooner. -Unmechanical: Extended