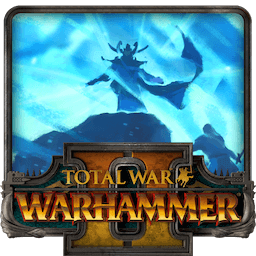 This is a game of two halves – one a turn-based open-world campaign, and the other intense, tactical real-time battles across the fantastical landscapes of the New World.

Play how you choose – delve into a deep engrossing campaign, experience unlimited replayability and challenge the world in multiplayer with a custom army of your favourite units. Total War: WARHAMMER II offers hundreds of hours of gameplay and no two games are the same.

The World of Total War: WARHAMMER II
Millennia ago, besieged by a Chaos invasion, a conclave of High Elf mages forged a vast, arcane vortex. Its purpose was to draw the Winds of Magic from the world as a sinkhole drains an ocean, and blast the Daemonic hordes back to the Realm of Chaos. Now the Great Vortex falters, and the world again stands at the brink of ruin.

Powerful forces move to heal the maelstrom and avert catastrophe. Yet others seek to harness its terrible energies for their own bitter purpose. The race is on, and the very fate of the world will lie in the hands of the victor.

Prince Tyrion, Defender of Ulthuan, guides the High Elves in their desperate efforts to stabilise the vortex as it roils above their home continent.

Atop his palanquin-throne, the Slann Mage-Priest Mazdamundi directs his Lizardmen war-hosts as they surge northward from Lustria. He, too, is intent on preventing cataclysm, though the methods of The Old Ones must prevail.

The Witch King Malekith and his sadistic Dark Elf hordes spew forth from Naggaroth and their labyrinthine Black Arks. He tastes great weakness in the vortex – and great opportunity in its demise. -Total War: Warhammer II

Meanwhile the Skaven, led by Queek Headtaker, stir in their foetid subterranean tunnels. There they multiply unchecked and look hungrily towards the surface, their motives obscured. The time for revelation is nigh…

Four races, four outcomes, a single goal: control of the Great Vortex, for good or ill.