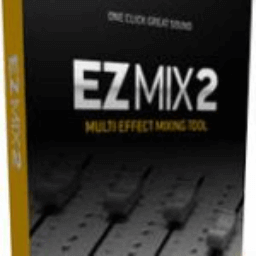 SIGNAL CHAINS INCLUDED.Use it as your new guitar or bass amp, to mix your song from scratch or top off your track with a mastering setting.

HOW DOES IT WORK?The EZmix 2 philosophy is as simple as it is complex. You only see the easy part – everything else goes on behind the scenes. Lend some pro secrets and platinum record magic to your music – it deserves to sound great!

GET TO KNOWTHE INTERFACE.EZmix 2 was designed to be as easy and intuitive as humanly possible but still leave you creative leverage – hence the two rotary controls. These are the central pieces of the software. They let you dial in and customize each setting. However, they don’t simply add more or less of a specific signal chain, they control each setting’s sometimes complex network of effects and allow you to tweak a creative take on each. In other words, each preset is much more than just one, plain setting.

WHAT GOES INTOAN EZMIX 2 SETTING?Each signal chain preset in EZmix 2 involves a series of effect units, expertly dialed in by professional engineers. A setting can involve anything from a plain but perfectly simulated guitar cabinet to a complex network of sends, effects and parameters.

HIGH-QUALITY EFFECTS.EZmix 2 is a powerful package that combines a multitude of quality studio effects with the know-how of professional engineers. As soon as you select one of the ready-made settings, a complex chain of effect units instantly loads seamlessly in the background.