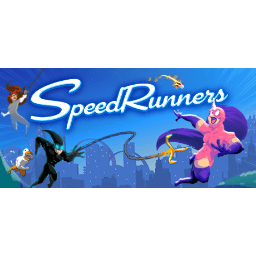 In a city filled with superheroes, getting to crimes becomes a competition on its own. Fortunately there are enough rockets, bombs, grappling hooks, spikes, and other goodies lying around — to make the competition fun and fast. Welcome to SpeedRunners.

SpeedRunners is a 4 player competitive platformer with grappling hooks, power-ups, and interactive environments. Run, jump, swing around, fire rockets, grapple onto people to knock them off screen.

Key Features
– Compete with up to four players online or offline!
– Catch up with other players or you are destined to fly off the screen!
– Use weapons like rockets, bombs, hooks to thwart your friends and make enemies!
– Local and online multiplayer! Two live players against bots? Why not?
– There are bots – play by yourself, or with other people!
– Training included
– Supports controller (recommended!)
– Unique mods!
– Unicorn!
– Level editor and workshop with thousands of levels! -SpeedRunners
– 50+ playable characters
– Full league system
– Local party mode that triggers an endless match – perfect for playing with friends!
– Create your own super speed trails!

“SpeedRunners is a fully realized idea, a great platformer, and a terrific party game that’s fun online as well.”
PCGamer