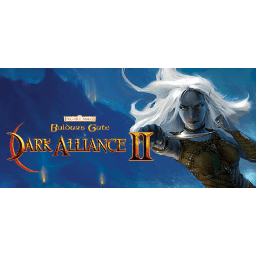 Events unfold in the city of Baldur’s Gate and its environs. The sequel has acquired several types of difficulties. After completing the campaign, which now consists of 80 levels, the extreme mode is unlocked. This role-playing action game has a large assortment of weapons, armor, spells, and skills. Heroes and heroines, after completing class tasks, gain access to additional abilities. The sequel has a system of gems, which allowed users to engage in crafting and increased replay value. The size of locations has grown in the sequel, and the number of side quests has increased. There was also a partial non-linearity.

This is not the original Baldur’s Gate: Dark Alliance II, but its remaster. Initially, this project was only released on consoles. Many years later, the developers made it available to PC owners as well. They tightened up the graphics, screwed up support for 4K resolutions and adapted the controls (gamepads are also supported). Also, developers have introduced achievements and added the ability to play together on one computer. In addition, the creators have updated some old skills. The plot picks up where the first part left off. Past adventurers climbed the Onyx Tower, where they were captured by the vampire Mordok Selanmer. In their place came a new team of adventurers who were hired to investigate serial murders. -Baldur’s Gate: Dark Alliance II

There are 5 characters to choose from with their own names, unique skills, individual fighting styles and classes:

Ysuran Auondril – a moon elf necromancer who can summon the undead and infect enemies with a plague;

Dorn Redbear is a human barbarian who relies on his speed and berserker attacks;

Vhaidra Uowiir is a dark elf nun who can fight with her bare hands and dual wielding;

Unspeakable evil has returned to the legendary city of Baldur’s Gate in this dungeon-crawling, action RPG fantasy classic. A call for adventurers echoes through the embattled land. Cunning warriors and bold magic users are desperately needed to reclaim Baldur’s Gate from a dark sorcery that threatens all in its path.

• Hidden areas, secret characters, and hundreds of items to discover, customize, and use

• Conquer hordes of beasts and armies of Hobgoblins, Ghouls, Golems and dreaded Dragons

This game may contain content not appropriate for all ages: Fantasy violence, Scantily clad women